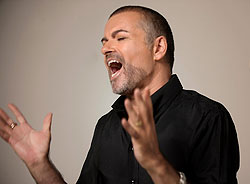 George Michael is one of the world's best-selling musicians, with album sales in excess of 100 million. George Michael initially found fame as one half of 80s pop duo Wham!, but then went on to enjoy even greater success as a solo artist following the duo's separation in 1986.

George Michael's debut solo album, Faith, has sold a staggering 25 million copies worldwide, making it one of the biggest selling albums of all time. The album won George Michael the second of his two Grammy Awards when it was voted Album of the Year in 1989. George Michael also has three BRIT Awards to go with his two Grammys.

George Michael made a welcome return to the UK stage in the autumn of 2012, when he completed his Symphonica: The Orchestral Tour.