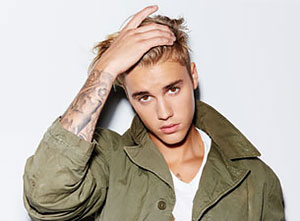 Justin Bieber propelled himself to stardom by recording covers of well known songs and uploading them to YouTube. By the end of 2010, Bieber had received more than 10 million hits on the site and was well on his way to becoming a worldwide superstar.

Justin Bieber returns to the UK again during the summer of 2017 for two huge shows at Cardiff's Principality Stadium and London's Hyde Park.