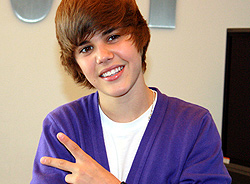 There are whispers around the internet that Justin Bieber will be starting a new UK tour in March 2011. It is anticipated that Justin will play Sheffield Motorpoint Arena on Wednesday 23rd March.

Bieber is the young sensation who took the internet by storm when he posted videos of himself singing hits by Stevie Wonder, Usher and others on YouTube. To date, his videos have had more than ten million views on the popular video sharing website.

More UK dates are expected to be announed next week and tickets are likely to go on general sale on Friday 19th November. As always, BIGLiveActs will be among the first to let you know when and where Justin will be playing so stay tuned.