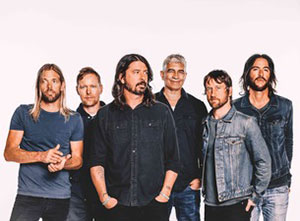 Foo Fighters will return to the UK in the summer of 2018 for three huge stadium gigs. The US rockers will perform one concert at Manchester's Etihad Stadium and two concerts at London's Olympic Stadium in June 2018.

Foo Fighters will be touring in support of their ninth studio album, Concrete and Gold, and will perform to 220,000 fans across the three UK dates.