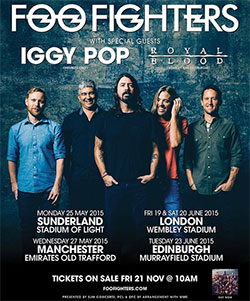 Foo Fighters have announced plans for a series of huge stadium gigs across the UK in the summer of 2015. The band will perform gigs in Sunderland, Manchester, London and Edinburgh in May and June next year.

The UK stadium tour will be in support of the band's eighth studio album, Sonic Highways, which was released earlier this week.

Announcing the tour with Zane Lowe on Radio 1, Dave Grohl commented: "Now we get to go out and do the thing that we really love to do. I can't wait. It's pretty awesome."

Foo Fighters will perform the following UK gigs in May and June 2015:

Tickets for Foo Fighter's 2015 UK stadium tour will go on general sale at 10am on Friday 21st November.