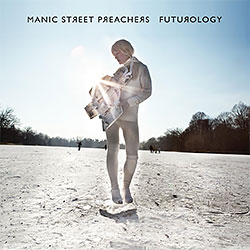 Out now is Futurology, the much anticipated follow up to last year's Rewind The Film. Whereas that album was almost entirely acoustic here we return to the Manics usual electric indie rock style. And what a return to style it is!

Since we reviewed Rewind The Film it has become one of our favourite albums although we are aware that some Manic fans are not so happy with it. We like its strong melodies and gentler and more adventurous arrangements. It is strange that others dislike it for the same reasons.

The songs for both albums were recorded along side each other during sessions in both Wales and Germany. The producer in both instances was Alex Silva and on the latest album he as assisted by Loz Williams and the Manics.

The internet has a number of intellectual reviews and dissections of Futurology which discuss its musical and lyrical influences and you are welcome to search out and peruse these. To us there seems to be more than a hint of Pseuds Corner about most of what you will read. Suffice to say that the album contains obvious Germanic, European and Russian influences but overall this is a vintage Manic Street Preachers.

The album starts off with the title track Futurology. This is a great song with a strong melody and is a superb album opener. In our view the best song on the album.

The second track is Walk Me To The Bridge. No matter how hard the Manics deny it there is no doubt that this is about the disappearance of founder member Richey Edwards. Consider these lyrics:

Track 5 is Europa Geht Durch Micht which is heavily influenced by Goldfrapp. It has a stomping electro beat and the chorus, spoken in German, is provided by the actress Nina Hoss. While it is not the best song on the album it grabs your attention from the start and is not one you will forget in a hurry.

Talking of influences, when Sex, Power, Love and Money opens it sounds exactly like The Offspring, and is none the worse for it. Are we the only ones to have noticed that?

Between The Clock And The Bed has a guest vocal by fellow Welshman Green Gartside of Scritti Politti fame. A super-smooth vocal which caresses the lyrics and glides the song along.

There are 2 instrumental tracks on the album. One of them is called Dreaming A City (Hughesovka). It starts off with a great bass guitar piece but then seems to lose its way, ending up sounding like the theme tune to a typical 60s/70s spy movie.

Misguided Missile has a good bass opening which tries to stay to the fore throughout the track but is sometimes swamped by the backing. This may have been better with just drum 'n' bass accompanying the vocal.

Which brings us on to our only reservation about the album, the production. Too often the backing seems to overpower both the bass parts and the drums. In particular Sean Moore's drumming seems to have been recorded in the 1960s when drums were barely audible and kept way back in the mix. We are now used to modern recording techniques where the drum kit fills the sound stage between the speakers. The Manics may not have wanted a pronounced drum sound on this album but it would be nice on some of the tracks to hear a bit more of the drums, and the bass guitar, driving the music on.

This is a great Manics album and is proof that after nearly 30 years in the music business they have not lost their energy and passion. How many groups can say that?