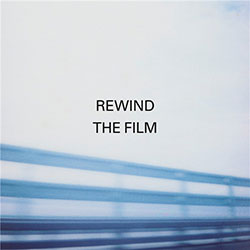 For their 11th studio album, Rewind The Film, Welsh rockers the Manic Street Preachers have chosen to go acoustic, with barely an electric guitar in sight. Do not despair, the result is a melodic and haunting album up there with the best.

The Manics burst on to the scene in 1992 with the album Generation Terrorists. This was well received and has been described as a mix of punk and glam rock with more than a nod to The Clash's London Calling. The themes of leftist political attacks,  personal despair and the daily struggles with life have continued to run through subsequent albums.

The band hail from Blackwood in South Wales. The original recording line-up was James Dean Bradfield, Nicky Wire, Sean Moore and Richey Edwards. In 1995 Edwards mysteriously disappeared and although his car has been found he remains missing. The band have continued as a 3 piece. The Manics have gained an enviable reputation and are regarded as one of our top alternative rock bands.

Rewind The Film is the first of 2 albums to be released following some mammoth recording sessions. It is best seen as a follow on in style from This Is My Truth, Tell Me Yours in 1998. The second album, to be released next year, is called Futurology and will feature lots of electric guitar sounds. Apparently it will be a natural successor to The Holy Bible from 1994.

The new album opens with a track called This Sullen Welsh Heart with guest vocalist Lucy Rose. It starts with some quiet spoken words by Nicky Wire: “I don't want my children to grow up like me, it's too soul destroying.” This rather bleak thought does set the tone for the dark Celtic introspection that often runs through the Manics songs.

There are 2 other guest vocalists: Richard Hawley lends his distinctive mellow voice to the title track, and Cate Le Bon gives a stunning vocal on 4 Lonely Roads. These guests have obviously been picked to enhance the songs and not just as a marketing gimmick.

An absence of electric guitars has given the band the opportunity to concentrate on the musical arrangements. Various instruments are used such as keyboards, horns, strings and Hawaiian guitar. The resulting album is varied and interesting but still carries the Manics identifiable sound signature. The production is excellent with full use made of the stereo soundstage.

Rewind The Film, a 7 minute epic and one of the Manics finest for a long time.

(I Miss The) Tokyo Skyline, an oddly beautiful track.

Manorbier, an instrumental track with a haunting arrangement.

All told this is a great return to form for the Manics. The album reached No.4 in the UK charts and bodes well for Futurology next year.