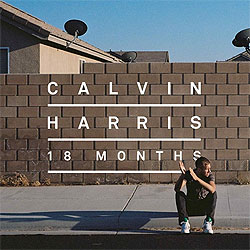 18 Months is Scottish DJ, singer and producer Calvin Harris's third album and follows his two UK Gold selling albums, I Created Disco in 2007 and Ready For The Weekend in 2009. It hardly sounds new as six of the tracks are already familiar, having been released as singles and become hits.

Harris's earlier success has enabled him to attract some big names to work with him. Five of the six previously heard tracks boast established artists:

Bounce features Kelis on vocals and was a No:2 single chart hit. It has a rather plinky-plonky synth sound running through it which becomes a bit maddening although is no doubt great on a sweaty dance floor.

Let's Go, another No:2 chart hit, features Ne-Yo and is an ordinary song which is turned into a driving synth raver between the vocals.

We'll Be Coming Back is a similar sounding track with a vocal by rapper Example. Again not a strong song but pleasant enough.

Sweet Nothing was a chart topper and features a collaboration with Florence Welch on singing duties. It has the typical Calvin Harris touches but ends up sounding very Florence & The Machine.

We Found Love is a song Calvin Harris wrote and produced for Rihanna and is another chart topper. This is a pounding electro-dance track and is the best on the album.

Since 18 Months was released two more tracks have been put out as singles:

Drinking From The Bottle has rapper Tinie Tempah on a straightforward club track which lacks a distinctive sound.

I Need Your Love is another standard club track featuring Ellie Goulding on vocal. It is the bonus song on her album Halcyon.

This is not the end of the guest singers:

Here 2 China features Dizzie Rascal and follows on from his successful collaboration with Calvin Harris on the singles Dance Wiv Me and Holiday.

Thinking About You is another recording Calvin has made with singer Ayah Marar and is the album closer. She does a good job on the vocal and is backed by a typical Harris club sound.

The remainder of the tracks on the album are a mixed bag of electro dance without any one standing out, except perhaps for the album opener Dream Valley. Here we have a quiet soundscape underneath an insistent voice which simply repeats "Oh" over and over - oddly attractive. Also we shouldn't overlook Feel So Close which was another big hit single for Calvin.

No doubt you have heard some of the previously aired songs and will know what to expect from this album. Production quality is good throughout and it is clear that Harris can write the occasional great tune, in amongst the average ones that is.