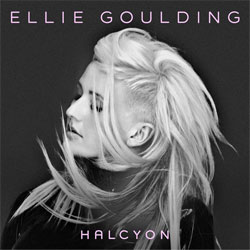 Ellie Goulding has certainly had a very successful time over the last 3 years. He début album Lights (later re-issued as Bright Lights) went straight to No.1 in the UK album chart. She won awards, sang a song for a John Lewis advert and has recently released her second album, Halcyon, which has just missed the top spot.

There was much talk about Halcyon being a change in musical direction from Lights, and indeed it is. Whereas Lights was electro pop/folk we find that Halcyon has moved largely into sweeping drum and synth territory with ethereal choruses and spooky electric piano. This is highly reminiscent of Florence & The Machine's Ceremonials. Ellie Goulding has a soprano voice with a breathy singing style which often sounds like Bjork crossed with Cerys Matthews. This whole confection is quite enjoyable but you do wonder if the real Ellie Goulding is being buried under the weight of it all.

With just one exception all of the songs were co-written by Ellie Goulding. Production was by Jim Eliot and Ellie Goulding on 6 tracks, with the others done by several different producers, Man of the moment Calvin Harris co-wrote and produced the bonus track I Need Your Love.

There is no denying that Halcyon contains several excellent songs. Anything Could Happen, the first single from the album, is a very catchy tune with an excellent arrangement and Ellie sounding as though she is really enjoying it. Joy is a quieter track with a Bjork sounding vocal. The music is kept in check for the first half and then builds up before dying away. Atlantis has the full works with a Florence & The Machine style chorus.

The second single is scheduled to be Figure 8, a slower and very dramatic song but which is spoilt by the backing music drowning out Ellie's voice.

Overall this is an enjoyable album. However it does leave you wondering who is the real Ellie Goulding? Maybe she is still finding her way and with her next album will have settled on her own musical style.