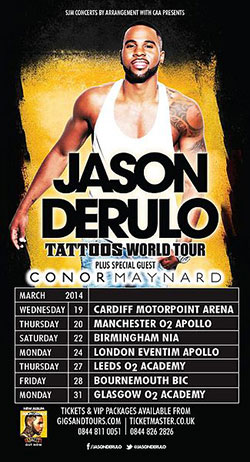 Jason Derulo has announced a series of UK tour dates for March 2014. The American R&B star will perform shows in Cardiff, Manchester, Birmingham, London, Leeds, Bournemouth and Glasgow during his visit to the UK next year.

Jason's UK tour dates will be in support of his recently released third studio album, Tattoos, which reached number 5 in the UK chart. The album contains the hit singles The Other Side and Talk Dirty (featuring 2 Chainz).

Back in 2012, Jason Derulo had been due to begin his biggest ever tour of the UK, but he injured his neck during tour rehearsals and subsequently cancelled all his UK tour dates. He will be hoping for better luck with his 2014 tour!

In addition to his seven UK shows, Jason will also perform one show in Ireland, at Dublin's O2 Arena on 30th March.

The full schedule for Jason Derulo's 2014 UK & Ireland tour is as follows:

Tickets for Jason Derulo's 2014 UK tour will go on general sale at 10am on Friday 11th October.