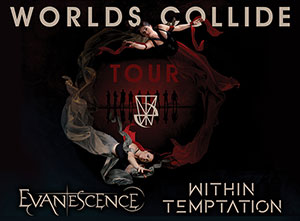 Evanescence and Within Temptation will join forces for a co-headline world tour in 2020. The two bands will play live at Glasgow's SSE Hydro on Tuesday 28th April as part of their Worlds Collide Tour.

Tickets to see Evanescence and Within Temptation live on tour at the SSE Hydro went on general sale on Friday 1st November, priced from £35 plus fees.