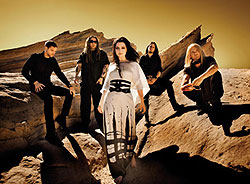 American rockers Evanescence have announced a UK arena tour to take place in the autumn. The Arkansas-based band will visit the UK in November for a short run of gigs at arenas in Nottingham, Manchester, Birmingham and London.

The tour will be in support of Evanescence's self-titled third studio album, which was released last year.

Evanescence will perform the following dates during the UK tour:

Fellow American rockers The Used will be the main support act. Additional support will be provided by British rockers Lost Alone.

Tickets for Evanescence's UK tour will go on general sale at 9am on Friday 20th July.