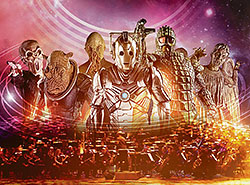 The Doctor Who Symphonic Spectacular is a live arena show, which features a host of the Doctor's famous adversaries – including the iconic Daleks and Cybermen, the spine-chilling Silence and many more fan favourites.

More than 100 actors and singers will take part in the live show. A symphony orchestra will play the evocative and thrilling music of Murray Gold – who has been responsible for composing music for the Doctor Who series over the last eight years – while a big screen displays iconic sequences from the past 50 years of Doctor Who.

The Doctor Who Symphonic Spectacular live show will tour the UK in May 2015, with dates set for London, Cardiff, Birmingham, Leeds, Newcastle and Glasgow.