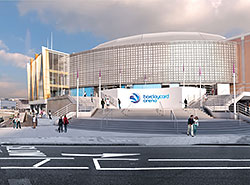 Owned by the NEC Group, the National Indoor Arena (NIA) in Birmingham was opened in 1991. At the time, it was the largest UK indoor arena of its type. Its current capacity is up to 15,800 with standing area.

As well as music concerts and comedy gigs, the venue has also been used to host the Gladiators TV show, Davis Cup tennis matches and WWE wrestling bouts, among other events. It remains as one of the UK's most versatile venues.

Harry Styles has announced a huge world tour which includes several UK & Ireland arena shows. The former One Direction singer will perform live at Birmingham Arena on Thursday 11th March as part of his Love On Tour with support from King Princess.

Stormzy has a massive world tour planned in support of his new album Heavy Is The Head. The Brit Award-winning rapper will play live at Birmingham Arena on Saturday 17th April as part of his H.I.T.H World Tour.