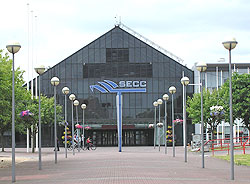 The Scottish Event Campus (also known as the SEC) is located on the banks of the River Clyde in Glasgow and is Scotland's largest exhibition centre. The SEC consists of a series of suites, halls and auditoriums. The largest hall (Hall 4) has a seating capacity of 12,500. The SEC also boasts its own railway station, plus a 4 star hotel on-site.

During a further expansion in 2013, the SSE Hydro Arena was opened with a capacity of 13,000. The new venue was again designed by Foster and Partners.