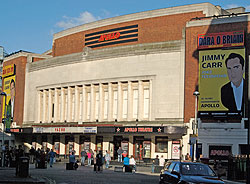 The Hammersmith Apollo was originally opened in 1932 as a cinema. With a (standing) capacity of just over 5,000 it has now developed into a very popular concert venue.

Many artists (including Robbie Williams, Kylie Minogue, Kings of Leon and Eddie Izzard) have released live CDs or DVDs of concerts staged at the Apollo.

The Apollo was designed in Art Deco style and is now a Grade II listed building. The Apollo's famous Compton pipe organ was fully restored in 2007, which has helped to preserve the rich history of this famous old venue.

Mabel will be touring the UK in early 2020 in support of her debut album High Expectations. The English singer-songwriter will perform live at London's Hammersmith Eventim Apollo on Wednesday 12th February as part of the tour.

The Joe and Dianne Show

Strictly Come Dancing finalists Joe Sugg and Dianne Buswell will be taking their own show on tour during the spring of 2020. The couple will perform their new show – which features music, comedy and a little bit of dance – at London's Hammersmith Eventim Apollo on Wednesday 8th April as part of the tour.

Elbow will be touring the UK during the spring of 2020 in support of the band's new album Giants Of All Sizes. Guy Garvey and co will perform live at London's Hammersmith Eventim Apollo on 27th, 28th and 29th April as part of the tour.