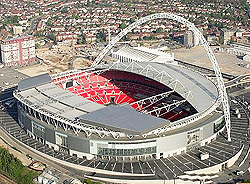 Completed in 2007, following disputes between the client and constructor, Wembley Stadium cost a whopping £798 million to build. Wembley is home to the England National Football Team, but has also played host to some amazing concerts in recent years.

BTS, Spice Girls, Fleetwood Mac, Bon Jovi, Billy Joel, The Eagles, Pink and The Who all played concerts at Wembley Stadium during the summer of 2019.