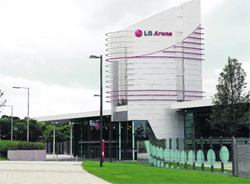 Birmingham's Resorts World Arena has a capacity of 16,000 and remains a favourite venue for many of the world's big live acts. Originally named the NEC Arena after it opened in 1980, the arena underwent a £29 million renovation in 2008/09 and was then renamed the LG Arena.

Boy band JLS will reunite for a huge comeback tour in 2021. Aston Merrygold, Ortise Williams, Marvin Humes and Jonathan 'JB' Gill will perform together at Birmingham's Resorts World Arena on Saturday 19th June as part of their Beat Again Tour.