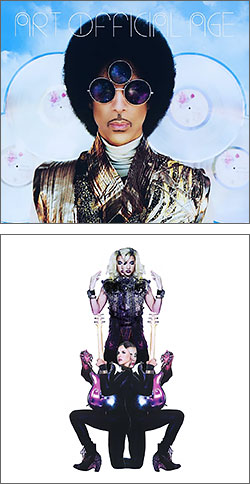 When Prince was in London in 2007 for his record breaking run at the O2 Arena he must have been subconsciously influenced by the red buses. Why? We have waited 4 years for a new Prince album and now 2 new ones come along at once.

These albums are called Art Official Age by Prince and Plectrumelectrum by Prince and 3RDEYEGIRL. They herald his re-signing to the Warner Brothers record label following his acrimonious split from them in the 1990s. You may recall that when he left Warners he identified himself by a strange symbol and was referred to as The Artist Formerly Known As...

The new albums are a return to form after a somewhat disappointing and variable run of albums post-Warners. The albums are very different. Art Official Age is perhaps best described as electro-funk with many external influences detectable, while still displaying Prince's distinctive guitar work throughout.

This is not a concept album but the song Clouds does refer to Mr Nelson (Prince was born Prince Rogers Nelson) having been in suspended animation for 45 years and waking up in a changed world. Subsequent songs hint at the fact that Prince may not be entirely happy with some of these changes. Fortunately this is not a grinchy affair and Prince remains upbeat, telling us to “ put your phone down and get your party on” in Funknroll, a song repeated in a different format on the second album.

Musically the album is fine although it does not break new ground, it follows rather than leads. The failing is that the songs are not strong enough to lift this into Prince's top tier of albums.

Plectrumelectrum is an album that was apparently recorded live in the studio using analogue equipment. It features Prince backed by his female rock band 3RDEYEGIRL who play bass, guitar and drums. Together the four of them create a tight and rhythmic group. On several of the tracks Prince hands over vocal duties to 3RDEYEGIRL and seems happy to noodle away on guitar.

This is a typical guitars and drums group sound. The failing on this album is that it does not soar away into the stratosphere as we know Prince can do so well. It sticks to a tried and tested formula and this does not necessarily best suit Prince.

The songs on Plectrumelectrum are stronger. Funknroll makes a reappearance in a much more complete way. It starts with a terrific crashing cord sequence before settling down. No doubt this great riff will be much sampled in future.

So there we have it. Prince back at his old home and starting to retain his former glory. Still some way to go but an encouraging start. Maybe the next album...