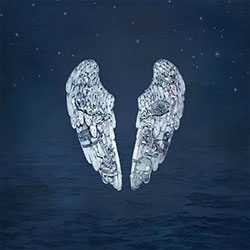 Could it be true? Do Coldplay read BIGLiveActs reviews? We ask because this 6th studio album, Ghost Stories, answers many of the complaints that we had about the recording quality of Mylo Xyloto. As for the content, it could hardly be more different.

We were disappointed with Mylo Xyloto's sound. Chris Martin's voice was too often swamped by the backing music which sounded muddy and confused, and there was an over-zealous use of the dreaded compression. Considering the number of people involved in the production it was a poor effort.

What cannot be denied is that the songs were of a very high standard and several have gone on the become firm Coldplay staples. The fact that they sound better when played live rather supports our views about the quality of the recordings. Just listen to Coldplay Live 2012 to get an idea of the difference.

Ghost Stories features 9 new songs and has been called Chris Martin's breakup album.  The songs are slow, quiet and personal and deal with the themes of heartache, breakup, loss, loneliness and finally hope. Gone are the trademark huge choruses with thundering drums and guitar and synth breaks. Here we have a cool, almost ethereal Coldplay in reflective mood.

By way of explanation of the lyrics Chris Martin has said: “The idea of Ghost Stories, for me, was 'how do you let things that happen to you in the past, your ghosts, how do you let them affect your present and your future?'”

Regarding the minimalist musical approach, drummer Will Champion explained: “There's only so far you can go without becoming pompous and a bit overblown, so we'll tread that line very carefully.”

The result is a quiet and hauntingly beautiful album which takes the band into new territory, and with great success. The musicians have far less to do than on previous Coldplay albums, their main role being to provide a sea of calm on which Chris Martin's voice can float. Here we can say that the recording quality is far superior to Mylo Xyloto; less compression, more clarity and full prominence given to the vocals. An excellent job, although it still takes an army of technicians to achieve the final result.

So, what of the songs? Album standout for us is True Love, a superb song with one of the few guitar moments on the album, an oddly almost-out-of-tune solo of great beauty. Of the others it is easier to list the songs that are not so great, in our case that would be Ink and O; these are not bad but not up to the high standard of the rest of the album. (Beware of O. It has a hidden track which starts some time after O has finished. However it is just some choral music and does not amount to much.) One track, A Sky Full Of Stars, threatens to break the mould because the chorus swells into a typical Coldplay thumper, but it is all kept under control and does not disrupt the flow of the album.

If it is late at night, you have a glass of wine and are in a pensive mood then Ghost Stories will fit the bill perfectly. Not familiar Coldplay fare but excellent none the less.