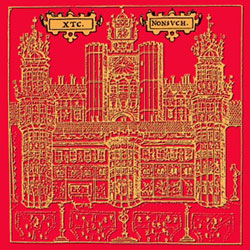 This review of the 1992 album Nonsuch by XTC is triggered by its recent re-release in a remixed and expanded edition under the banner “The Surround Sound Series”. It is believed that all of the XTC albums will gradually be re-released, the next in line possibly being Drums and Wires.

If you asked 100 people what they know about XTC the majority would say they had never heard of them, and a handful may recall the hit singles Making Plans For Nigel, Senses Working Overtime and Sgt. Rock. Otherwise zilch. Quite why this is so remains a mystery. In fact it is not an exaggeration to say that XTC are probably the most inventive songwriters and musicians to follow on after The Beatles. Between 1978 and 1992 they released 12 Virgin label albums (2 under the side project name of The Dukes of Stratosphere)  which maintained a high quality level as their career developed from a punk start through to a sophisticated rock.finale.

And yet, apart from their loyal fans, XTC and their albums remain unknown to the music buying public. One of the main reasons for this may have been the lack of promotion from April 1982 onward after the abandonment of live work following Andy Partridge suffering from extreme stage fright. Another reason may be the low profile of a group which did not have any flamboyant personalities; think Freddie Mercury, Mick Jagger, Bono or Keith Moon for example. Unfortunately sheer musical excellence on its own rarely makes for a popular mass market act.

So, who were XTC? The core lineup was Andy Partridge, guitars and vocals, Colin Moulding, bass guitar and vocals, and Dave Gregory, guitars and keyboards. The original drummer was Terry Chambers who left after the 6th album and thereafter the position was fluid. The band hailed from Swindon and were often called “Swindon's finest”. Most of the recorded songs were written by Andy Partridge or Colin Moulding.

Nonsuch was issued in 1992 and was the band's 12th and final album for Virgin and is regarded as one of their best. It had 17 tracks, 4 from Colin Moulding and 13 from Andy Partridge, with a running time of just over one hour. The hired drummer on this occasion was Dave Mattacks of Fairport Convention and the original producer was Gus Dudgeon.

It is difficult to select the foremost tracks from the album as apart from a couple of weaker songs the whole album is filled with melody, variety, wit, intelligent lyrics, great music and arrangements. The first song is the rousing The Ballad Of Peter Pumpkinhead who is a near perfect man who makes enemies and pays the ultimate price. Other great Partridge songs include Dear Madam Barnum, a tale of fidelity using circus imagery; The Disappointed which is a sublime rocker; Holly up on Poppy, a song about Partridge's daughter riding her rocking horse; Then She Appeared which is a ballad about first love featuring Beach Boys style harmonies; Wrapped in Grey is another slower song with a delicate piano refrain; and Books Are Burning, a brilliant album closer about censorship of the written word featuring a guitar play-out between Andy Partridge and Dave Gregory.

Three of Colin Moulding's songs rate just as highly. The Smartest Monkeys is about homelessness, War Dance is a glorious melody with an infectious accompaniment, and the truly quirky Bungalow concerns the Englishman's obsession with bungalows!

Intelligent and sophisticated songwriting and music of the kind on display here is often seen as 'arty' and can put off prospective listeners. It is neither mainstream pop nor heavy rock and maybe it has fallen between musical stools, which is a great shame.  Nonsuch reached just number 28 in the UK album charts and number 97 in the Billboard chart. Strangely XTC were perhaps more well known in the USA where they were appreciated by college students.

Now the album has been re-issued. There are 3 editions; ordinary CD with the remixed stereo version, CD and Blu-ray with a host of extras on the second disc including a surround sound mix by Steve Wilson, and CD with DVD A. The remix has been extremely well done and enhances the original album. Fortunately the overall sound has not changed much, the improvements being that it seems fresher and the audio is of a higher quality with a more well defined stereo mix. For example, the bass guitar on The Ballad Of Peter Pumpkinhead now sounds more like a real bass guitar and has greater drive than on the original. Again, the guitar play-out on Books Are Burning is much better defined and sounds more exciting than previously.

Included on the remixed album is a song which did not make the cut for the original release. It is called Didn't Hurt A Bit and is by Colin Moulding. Not his strongest song but a bonus for the fans.

Those who have heard the 5.1 surround sound version have been ecstatic in their praise for the job Steve Wilson has done. It seems to have set a new standard.

The best version to buy is undoubtedly the CD and Blu-ray pack. With a mass of extras on the Blu-ray disc (original stereo mix, instrumental versions of all the album tracks, surround sound mix, many demo tracks, some promo videos and a 48 minute film of the studio sessions) and at not much more than the cost of an ordinary CD it represents amazing value for money. It is a good example of how re-issues should be done. Congratulations to Andy Partridge and Ape House who were behind this project.