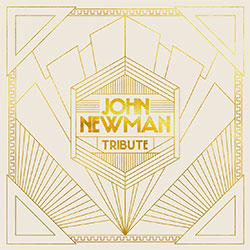 A few months ago John Newman was heard everywhere thanks to 2 hugely successful No. 1 singles. His much anticipated first album followed and was widely praised by the music buying public although it received a mixed reaction from the critics.

The album is called Tribute and the singles were firstly Rudimental's Feel The Love with John providing the vocals, and then his own Love Me Again. Let us say straight off that if you liked the singles you will love the album, and it seems that a lot of people do just that. The album went to the top of the UK charts.

The first and title track on the album is Tribute. This is very interesting because the song starts off with John reciting a long list of his musical influences, and a diverse list it is, stretching from Elvis to Jay-Z via such acts as Edwin Star, Jackie Wilson, The Stones, Spencer Davis and Michael Jackson. His formative years were spent listening to his mother's favourite Motown and soul music, and latterly he has been working with the electronic group Rudimental. Thus you would expect the album to be a concoction of soul and electro, and basically that is what it is.

There are 15 songs on the deluxe edition of the album which runs for 55 minutes. All were co-written by John Newman and mainly concern love, break up and heartache. Producers were Newman and Ant Whiting with help from Steve Booker and Mike Spencer. Production values are excellent. The music features strings, piano and driving bass rather than relying on guitars. There are clear references to Motown and electro throughout.

Crucially the music does not swamp Newman's distinctive rich soul voice which is allowed to be showcased. It is this voice that will ensure Newman has a lasting presence in music and will not be a one hit wonder.

The second single off the album (Love Me Again was the first) was Cheating and this was followed by Losing Sleep. Neither single managed to repeat the earlier success, probably because they were not strong enough.

The one adverse criticism of the album is that although there are a couple of slower tracks the overall sound is very similar i.e. Love Me Again, and you do yearn for a bit of variety in both tempo and arrangement. We suspect that will be corrected on the next album.