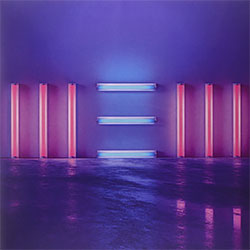 At 71 years of age, and with a 50 year recording career under his belt, Paul McCartney could rightly retire with a job well done. But no, he has recently released his latest album of all new compositions, and it is called New.

It seems that McCartney's enthusiasm and love of music just keeps rolling along. He has shown time and again that he has the knack for writing melodic tunes in both rock and ballad forms. Over his long recording career with The Beatles, Wings and then solo he has released many albums of mainly original self written songs. Some albums have been outstanding (such as Band On The Run – see our classic album review) and some less so, but what can be said about them all is that within each lurk several superb tracks.

The standard New album has 12 tracks and the deluxe edition has 14 tracks. All songs were written by Paul McCartney except for 3 which were co-written with Paul Epworth. Usually McCartney works with one producer per album but here four producers have been used; Paul Epworth on 3 tracks, Mark Ronson on 2 tracks, Ethan Johns on 3 tracks, and with Giles Martin on 6 tracks and as overall supervising producer. These are all relatively young men who have ensured that the album has a modern feel.

With four producers the album could have sounded disjointed but in fact comes out pleasingly unified, no doubt down to Giles Martin's overall control. The audio quality is high with excellent stereo image and good balance.

Musicians on the album include some from McCartney's current touring band. The instrumentation is fairly basic and largely features guitars, drums, bass, keyboards, piano and organ. Nevertheless the production is full and the sound is never thin.

If you are looking for an album of melodic tunes, catchy riffs and hooks, and with a hint of Beatles, then this is the one for you.

The album opener is Save Us and sets the pace. It is a rocker with a great tune and with an excellent riff running through it. Surely a future touring favourite.

Alligator is next and is another good tune given a boost by some excellent backing music via Mark Ronson who has achieved a Wings period sound.

Things slow down for track 3, On My Way To Work. This is a nostalgic song about Paul's younger days and refers to him riding to work on a bus. Difficult to imagine these days.

Now we come to Queenie Eye which is one of the best songs on the album. An infectiously catchy rocker which includes a call and response chorus which is bound to make it a live favourite with audiences. Not surprisingly, released as a single.

Early Days is another nostalgic autobiographical song which is clearly about Paul and John Lennon as young men starting out in music. 'Dressed in black from head to toe, Two guitars across our backs, We would walk the city streets.' Produced by Ethan Johns with his trademark lean production, and a rather vulnerable vocal from Paul. A classic.

New is the album title track and the first single release. A strong song with a very middle period Beatles sound.

Appreciate has an electro feel (from Giles Martin) running throughout and the resulting sound would not have been out of place on the Press To Play album. Not the strongest song here but given a nice lift by the arrangement.

Next is Everybody Out There, another catchy tune which would make a good future single off the album.

Hosanna illustrates a typical McCartney trick; take an average song and raise it up a few notches with an appealing rock vocal and a great acoustic production, here courtesy of Ethan Johns.

I Can Bet is another catchy medium paced rocker with a big production.

Looking At Her is a slower Beatles style ballad which is typically McCartney. Hang around because it does get going as the instruments move in.

Road is the final track on the standard album, and includes a hidden track – see below. This is a fairly ordinary song which sounds so much better as a result of the complex Paul Ebworth production. It features superb bass playing from Paul. (Diversion. In your fantasy rock group who would be your bass player? We would say Paul McCartney first, followed by joint second of Sting for the slower numbers and Flea for the rockers.)

Turned Out sees Ethan Johns producing a rocker for a change, and it's a good one.

Get Me Out Of Here starts off with Paul singing to an acoustic guitar and drum accompaniment which sounds very much like a busker/one man band. It does not develop much from there. Strangely compelling. This is followed after a 20 second break by the so called hidden track Sacred. This sees Paul playing piano and singing a soul searching ballad for a rather downbeat end to the album. A superb song and performance though.

Well, there we have it. By any standards an excellent album and a signal that there is still a musical fire raging within. A good collection of songs showcasing Paul the rocker who is now able to bare his soul in reflective mood. What's more he has avoided the tendency to mawkishness that has sometimes invaded his songwriting. One of his best albums for some time.