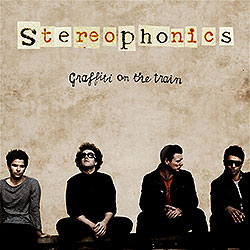 Welsh rockers Stereophonics have followed up their somewhat disappointing last album, Keep Calm And Carry On, with this latest studio production, now on their own Stylus label. Called Graffiti On The Train it is a distinct improvement and, along with the new label, seems to herald a renewed recording energy.

When Stereophonics burst on the scene in 1997 with their debut album Word Gets AroundÂ  they made quite an entrance. Here was an unapologetic guitars and drums rock outfit with an intriguing range of song subjects. Headed by Kelly Jones, he of the rasping voice, Stereophonics were just what we needed, giving it to us straight without fancy gimmicks or pretensions.

The band does have its critics who repeat almost parrot fashion that they were a meat and potatoes pub band. (As an aside, with the wholesale closure of clubs over the last few years it is a fact that pubs are one of the few places left for bands to graft and learn their trade. Far better that than be parachuted from a talent(less) show to a recording contract before you are out of nappies.) Over time the Stereophonics run of 8 studio albums (which includes 5 No.1s) has shown just how much the critics know. We have seen consistently good music and song writing with resulting high music sales and sell out tours.

After 3 years of recording freedom Kelly Jones has come up with an excellent set of songs and some great arrangements. The overall sound is more mature and considered but the underlying rock is not far away e.g. album opener We Share The Same Sun is a good driving song in the old vein. This slows down for the second track, Graffiti On The Train, where there is a string backing and some interesting and melodic guitar work.

The album tracks are a mix of rockier and slower songs. Catacomb is a stormer with hints of Muse whereas Been Caught Cheating is a bluesy country effort. Violins And Tambourines is one of the best grooves, starting off slowly and then building to a rousing finish.

Current single Indian Summer is a memorable song. It is followed by Take Me, one of the catchiest songs on the album and where Kelly is joined by a female singer, his partner Jakki. The result is haunting and mesmerising.

However the standout track is the album closer, No-one's Perfect, which is a ballad sung exquisitely by Kelly Jones, easily his best vocal for a long time, if not ever; a beautiful performance.

This is a strong album, reached No.3 in the UK charts and is already certified Gold. Kelly Jones has raised his game here and we look forward to his future work which is apparently going to include film production. On the strength of this album he is likely to enjoy continued success.