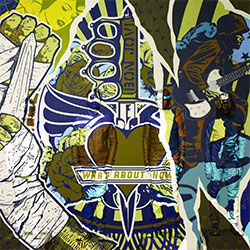 This year Bon Jovi celebrate 30 years together and have released their 12th studio album, What About Now. The group remains hugely successful: in 2011 Bon Jovi grossed over £192M from live appearances, being eclipsed only by U2. Therefore we expected great things from the new album.

As is the nature of life we have to report that What About Now is a disappointment, if you are not a committed fan that is. Bon Jovi started out as an all American rock group with a raw and powerful singer in Jon Bon Jovi and an excellent guitarist in Richie Sambora. The breakthrough came with the release of the 3rd album, Slippery When Wet, which went to No. 1 in America.

Hit singles followed and perhaps the most well known is Livin' On a Prayer, a live performance favourite. And it is probably as a live act that Bon Jovi excel. The group's recorded output has slowly become rather more staid and predictable with time. Middle age has seen a mellowing of the sound with a softer and less exciting edge. Gone are the stratospheric rock vocals and the searing guitar solos.

How does What About Now fare? Well, it follows the downward progression. Here we have 12 original songs which are mostly medium paced rockers, or shall we dare to say middle of the road? The vocals are safe and the guitar playing is undistinguished for the most part. The album opens with one of the best songs, Because We Can, which is strong and will become a stadium sing-a-long. This moves into a slower and attractive rock ballad, I'm With You, which has shades of Red Hot Chili Peppers to the sound. (Oddly, I'm With You is the title of the Peppers current album although the Bon Jovi song has no connection to it.)

The rest of the album is mostly made up of medium paced rockers with rather underpowered vocals and subdued guitar parts. Army Of One is a better track. It has thundering drums, an organ backing, a big chorus and Richie Sambora can be heard! The songs Thick As Thieves and The Fighter (which closes the album) are two slower ballads with acoustic guitars and strings. These are both good songs and give Jon Bon Jovi a chance to display his quieter and more emotional singing style.

Technically the album is only average. Poor use is made of the stereo soundstage for large parts of the album and there is zealous use of compression and distortion. Sadly these sins are all too frequent so we won't blame the group for that.

Bon Jovi fans will like the album; one told us it is up there with the best. However, for us it is a bit samey and timid.