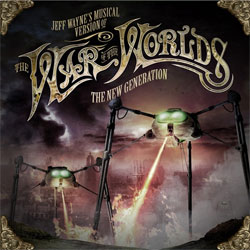 Following our Classic Album Review of the original 1978 version of War Of The Worlds we have now considered Jeff Wayne's newly updated release. Rightly or wrongly this new version is bound to be compared to the original. Is it found wanting? Read on...

Jeff Wayne has given his reasons for re-recording the musical as being an opportunity to develop some aspects of the story and the main characters, and to use modern production techniques to enhance the music. It is clear that he also had an eye on his successful live version of the musical as some of the changes are clearly intended to fit in with a revised stage format.

The 1978 issue was a sensation. It took the rock opera album concept to new heights and has become an enduring classic. Tampering with something so familiar and well loved is a dangerous thing. However, if it is going to be done then it is probably best handled by the originator i.e. Jeff Wayne.

Musically Jeff has done a great job in updating the score to give it a modern feel while at the same time retaining the basic musical sound. Some of the original musicians, notably Herbie Flowers and Chris Spedding, appear on this new edition. You can argue about the changes, which are often subtle ones, but overall this is a job well done. Certainly the audio quality is much improved as you would expect after more than 30 years. Great use is made of the stereo soundstage and the instruments, particularly the bass and drums, are much better defined.

The only audio downside is the use of sound effects. These are more numerous and prominent than in the original version and this can at times be annoying because it detracts from the music. One such error is the expanded sequence when the canister top is unscrewed on Horsell Common. This is a lesson in the old saying that less is more.

So, top marks for the music. Now we come to the vocals and here the praise runs out. The most significant feature of the 1978 edition is the use of Richard Burton as The Journalist, who narrates the story. His was the supreme actor's voice of his generation. Rich, dark and dramatic, the narration set the tone for the entire project. Sadly Richard Burton is no longer with us and Jeff Wayne has used Liam Neeson this time round, and what a poor choice he is. Lacking both gravitas and drama Neeson provides a lightweight conversational style of narration which at times sounds rushed, as though he cannot wait to finish reading his script.

None of the original singers have survived on The New Generation. The new line up is Gary Barlow (he's starting to pop up everywhere). the Kaiser Chiefs Ricky Wilson, Alex Clare, Maverick Sabre and Joss Stone. These are all capable singers but several of them have speaking parts and it is here that things just don't ring true. Joss Stone acquits herself well. Ricky Wilson and Alex Clare are are far less impressive but just about scrape through. Unfortunately the exquisitely named Maverick Sabre is unsuitable for the major speaking role of Parson Nathaniel. The problem is that these are singers and not actors. In 1978 Jeff Wayne had used David Essex, who is an actor/singer, to great effect in the part of The Artilleryman. For the extended speaking part of Parson Nathaniel he had chosen Phil Lynott, the singer with Thin Lizzy. This had been a surprisingly good choice because Phil made the part his own.

This miscasting of the speaking parts is the downfall of the album. Even if you had not heard the original version you would not be entirely happy or convinced by some of the vocal passages on The New Generation.

Here's a thought. Just which audience is The New Generation aiming to capture? Even with the updating it is hardly the sort of music that is going to appeal to youngsters. Fans of the 1978 version may be tempted to buy it to see how it compares, and that is about it. It has not set the album chart alight and our guess is that in time it will quietly disappear and the original version will continue to be the one of choice.

And here's a final thought. We have bought the vinyl album, the cassette, the CD, the remastered CD, the 30th Anniversary CD, the SACD, the 7 disc special edition set, the download and now The New Generation. That must be the end of the road, mustn't it?

Disc 1: The Coming Of The Martians

Disc 2: The Earth Under The Martians