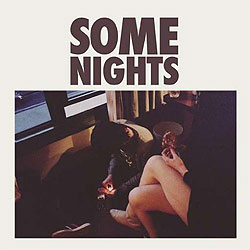 Fun is an American 3 piece indie pop boy band. The first album, Aim and Ignite in 2009, failed to dent the UK chart but the second, Some Nights, has been a breakthrough for the band this year. Having played it a few times it is clear that here is a case of Fun by name and fun by music.

Probably the whole planet has listened to Fun's track We Are Young, a huge and amazingly infectious song with a stunning chorus. Once heard it keeps on buzzing inside your head. Good news! The Some Nights album contains 10 more songs in a similar vein. Catchy, involving, stomping and hook laden is the name of the game. These boys know how to write pop anthems.

The album opens with Some Nights (intro) which sounds like a Broadway show tune and features Fun singing a la Bohemian Rhapsody era Queen. Most unexpected and in some ways the best track on the album. From there it is straight into Some Nights itself, a successful single and another rousing song.

We Are Young is track 3 and is followed by Carry On, the latest single, with a huge production and a catchy chorus - they seem to be able to pull these out of thin air.

And so on to the end. Each track is excellent, with special mention of Why I Am The One, a quieter ballad with a big vocal chorus which would make a suitable future single release, and One Foot, a stomper with massive crashing synth chords backing the vocals.

Musically we are in electro pop territory with galloping drums, fuzzy guitars and with the occasional use of an orchestra and choir. Sometimes it all sounds a tad chaotic and frenzied but it works well with the party atmosphere that pervades some of the tracks. The main producer is Jeff Bhasker although some others were involved.

Lead singer Nate Reuss handles the vocals well and his use of Auto-Tune to give a Vocoder type effect on his voice on a few of the songs just adds to the overall style of the album.

Whether or not this is usually your type of music there is little doubt that this album has wide appeal. If you put aside your prejudices and just give it a chance you will not be able to sit still or resist singing along. A thoroughly enjoyable and strong album.