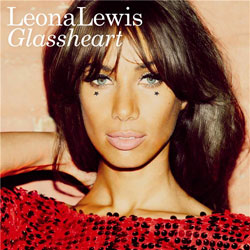 Leona Lewis's second album, Echo, was released in November 2009. After a gap of almost three years her third, Glassheart, has now appeared. If time spent equals quality achieved then Glassheart should be a winner. But is it?

We all know that Leona Lewis won the 2006 X Factor. She was obviously a huge cut above the usual contestants and was clearly someone special. It looked as though Simon Cowell thought so too and was anticipating her becoming a global superstar. Leona's first album, Spirit, in 2007 was a big hit and reached No: 1 in many countries including America. It contained the stunning track Bleeding Love. The subsequent de-luxe version of the album added the Snow Patrol song Run which had been a superb single hit for Leona and remains her finest recording to date.

The second album, Echo, from 2009 was not so successful and reached the top spot only in the UK. None of the tracks came near to the quality of Bleeding Love and Run.

So why the delay with Glassheart? It was scheduled for November 2011 but the date was put back, apparently because Leona was said to be exploring new music. When you listen to the album you will hear something new for Leona – dubstep on two of the tracks. Otherwise it is the same as before, with a more up-to-date electro twist in places.

Glassheart is a grower; you need to listen to it several times for the songs to make an impact. Overall it is a good album but could have been better. Let's look at it in more detail:

The standard album has twelve songs and a bonus track. Seven of the tracks are very good/excellent. These are:

Trouble. This is the lead single and is a typical big, dramatic Leona Lewis ballad with thundering drums and chorus.

Come Alive. The first of the dubstep tracks with plenty of deep bass.

Shake You Up. An up-tempo 80s style track which really zips along.

Stop The Clocks. A ballad with a very attractive chorus.

Favourite Scar. Interestingly, two of the five writers credited to this song are Curt Smith and Roland Orzabal i.e. Tears For Fears. They are not listed as producers and yet the end result is a very Tears For Fears sounding recording. Excellent.

Glassheart. The title track and the second dubstep one. This is terrific, with great electro music and Leona contributing well. Would make a good, if somewhat unexpected, single. The best thing on the album.

Fingerprint. Another typical Leona ballad and a fine one at that.

The album illustrates Leona's fine voice and demonstrates, as she wanted, that she can try something different, such as dubstep, and handle the change.

The Not So Good

Here again we have an example of the old saying 'Too many cooks spoil the broth.' There were a total of fifteen producers across the album tracks. The result is an audio disappointment. In too many places Leona's voice is swamped by multi tracking, backing singers and the music. On the one track where her voice is allowed centre stage, Fingerprint, you can hear her clearly and appreciate her vocal.

Furthermore, the quality control is poor with too much distortion and muddiness. It may be that this was deliberate but for a vocalist such as Leona the recording needs to be as clear as a bell. It's all about her voice, not the producers.

A good third album where Leona Lewis has tried something a little different with variable success. It is frustrating that she does not seem to be realising her great potential. Trawling through many producers rarely results in a satisfactory album. Ditto songwriters, of which there were many, with Leona contributing to seven of the songs.

For her next album Leona should consider working with just one producer. Ethan Johns is the man who would bring out her voice and encase it in a subtle musical wrap. And after the brilliant job she did on Run Leona should try out a few more covers. We can but hope.