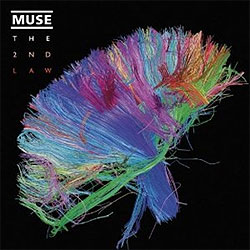 Warn the neighbours. Put the pets out. Remove delicate items. Keep ear defenders handy. Strap yourself into your chair. Pump up the volume. Muse are back!

After the triumph that was The Resistance in 2009 Muse have just released their new album The 2nd Law. You won't be disappointed because this is another excellent dose of audio pyrotechnics from a band that has no fear. They may be derivative but Matthew Bellamy, Christopher Wolstenholme and Dominic Howard have matured into their own unique style of spectacular wide scale electro rock. Muse is the result of a union between Queen and Pink Floyd with many other influences in the genes. Brian May has been quoted as saying that Muse are "extraordinary musicians" who "let their madness show through."

There are 13 songs on the album and all but 2 have been written by Matt Bellamy. Muse produced the album, with outside assistance on several tracks. The outcome is a great sound, having deep but well controlled bass and superb sonic effects. If you have bought a good hi-fi system, or headphones for your mobile device, then this album will make you realise that your investment has paid off.

So, let's run through the tracks:

Supremacy is a brilliant album opener and is likely to become an instant Muse classic. All the Muse hallmarks are present; great riff, quiet and intense vocals in the verse, explosive musical breaks, fuzzy guitars, and all backed by a large orchestra and choir.

Madness is a quieter track with prominent and mesmerising electro effects accompanied by a thunderous bass. There is a nice Queen style guitar break a la I Want To Be Free.

Panic Station opens and you think it is going to be Another One Bites The Dust, and then it reminds you of Thriller.

Prelude is a short piece of classical music to lead into....

Survival which was the 2012 Olympics theme song. This is notable for the sweeping operatic choir behind chugging music which builds to a massive ending. Very exciting.

Follow Me is a more straightforward song with driving drums and an ear shattering deep electronic phasing effect. Beware - do not play this too loud through headphones. Reminds some people of I Will Survive.

Animals is a relatively quiet track which eventually breaks out into a long guitar driven ending. Very Radiohead.

Explorers, a beautiful melody. A big ballad about ecological disaster which manages to keep the lid on it until the end. Another standout track.

The next 2 songs are written and sung by Chris Wolstenholme and deal with his battle against alcohol abuse:

Save Me is very Tears For Fears. Dramatic, and would make a good film soundtrack. One of the most melodious songs on the album.

Liquid State has a typical Muse chugging riff intro which runs right through to the end. Darts about like a bumble bee - very infectious. Could be the Foo Fighters at their rocking best.

And now for the closing suite of 2 songs. In your wildest dreams you would not expect to hears songs about The 2nd Law of Thermodynamics, but incredibly here they are:

The 2nd Law: Unsustainable is epic in every way. A computer manipulated female voice recites the 2nd law against an orchestra and choir backing. Ferocious electronic effects take over and compete against each other (cyborg-rock?) across the speakers. Mind blowing stuff.

The 2nd Law: Isolated System is a quiet end to the album. Very Tubular Bells in sound and a peaceful, melodic track to ease us out of the 2nd Law.

Muse seem to be a Marmite band, you either love them or hate them. If you are a follower then this new album is essential listening. Without doubt one of the highlights of the musical year so far.