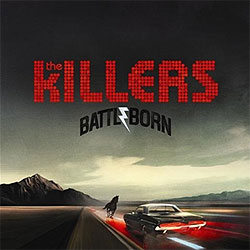 The Killers have had an amazingly successful run since the band was formed in 2001. The first 3 studio albums went to No. 1 in the UK album charts. Now after a 4 year gap the latest album Battle Born has been released and has gone straight to the top in its first week. Four in a row is impressive.

Battle Born has 12 songs all written or co-written by front man Brandon Flowers. And this is my first problem with the album; the songs are just not good enough. We all expect a few fillers on an album but here there is, in my view, only one really good song and it is the title track, which has been kept until the end. It makes a great closer but you long for more of that quality. There isn't anything here to approach the standard of Human, for example, which will remain an enduring Killers classic.

Musically the album raises another issue. There were 6 producers participating in the recording, with Steve Lillywhite taking the lion's share by being involved in 6 of the tracks. The resulting sound jettisons indie rock for something more akin to 80s U2 or Springsteen, but in a rather muted fashion. There is little energy here and it certainly won't upset the neighbours. All very unadventurous and old fashioned, which will sit comfortably alongside Foreigner, The Eagles and Fleetwood Mac on an American AOR radio station.

The production has resulted in a sound which is rather flat and safe. Where is the indie force of Mr Brightside, the band's first big hit? The answer is that it has left the recording studio and to some extent I feel the producers are to blame. Next time out The Killers would be well advised to turn to one of the young up-and-coming producers to keep them relevant and give them back their edge.

The songs concern life, family, love and loss in small town America. Best are Heart Of A Girl which sounds influenced by Lou Reed's Walk On The Wild Side, and the better Battle Born which is going to become a live show sing-a-long favourite.

If you are a Killers fan and you like Brandon Flowers' voice then you may well appreciate this album, although I am sure you will still prefer Hot Fuss. The band seems to have lost its way a bit so better luck next time.