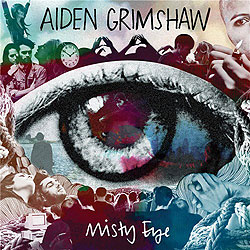 Wow! Again Wow! Nay, thrice Wow! Who would have expected an X Factor contestant to break the mould and release an album that was anything other than typical production line pop. Step forward Aiden Grimshaw who, with his album Misty Eye, has given us an outstandingly individual and different debut.

Aiden appeared on The X Factor in 2010 and managed to reach 9th position. He seemed shy and ill suited to the TV format and was no doubt relieved to be eliminated. He was constantly praised by the judges but lost out to Katie Waisell in a public vote. Unbelievable, but probably the best thing in the long run.

Misty Eye contains ten songs, all except one being co-written by Aiden. The producer is Jarrad Rogers, an Australian musician, songwriter and producer who moved to the UK in 2006. Misty Eye is his 2nd full album production and a superb job he has done on it.

This is not an easy first listen. The music is intense, haunting, raw and soul searchingly doom laden. Do not give up because repeat listening pays dividends and the beauty of the music shines through. You should be hooked. The overall sound is electro pop laced with drum 'n' bass and soaked in echo. Aiden's voice is often fragile, but can be strong and is sometimes a soaring falsetto.

The opening track on an album should set the tone for what follows. In this case Hold On does an excellent job by introducing us to the slow drum'n'bass beat, the electro quirks in the background and the overall echoey sound.

Is This Love was the first single although not a big hit. It is a radio friendly song and not the strongest on the album.

What We Gonna Be introduces guest artist Smiler occasionally rapping on a dance track. Frankly it would have been better to leave that out of the song. Nevertheless this is a good faster track when Aiden takes over the singing.

Misty Eye is the title song and you would expect it to be one of the best, and it is. A melodic track which introduces string backing and has an interesting male vocal deep in the mix.

Be Myself is a ballad with hints of Moby in the sound. An effective song about staying true to your identity. Reflections on The X Factor perhaps?

This Island is a song about lost love and the anguish it leaves behind. When Aiden sings the refrain "let it hurt again" you are instantly reminded of a typical big Tears For Fears production.

Breathe Me is a cover of the Sia song. Here it is stripped back initially to a heavy, slow bass and a vocal which at times is truly tortured. It builds very effectively and is half way to being the musical equivalent of Edvard Munch's The Scream.

Poacher's Timing is an unusual song title and it is not clear what it means. There is a very strong vocal which is sometimes heavily processed. Probably the best vocal on the album and underscored by a foundation shaking bass. The repeated line "give me some rope which I can hang with" is rather disturbing. Strange but compelling.

Nothing At All is a faster drum 'n' bass track with a great female vocal in the backing chorus which raises this well above the average. Very catchy and would make a great single.

Curtain Call is the second single to be taken from Misty Eye. An excellent song featuring guest vocals from ShezAr. A great anthemic closer to the album.

This is a stunning album in many respects. So unexpected and different. At times intense, tortured and personal it demands the listener's attention. Brave of the record company to release it. Misty Eye rose to 19 in the charts and then sadly disappeared. It deserves better and here's hoping that RCA stands by Aiden and he is able to bring out a follow up.