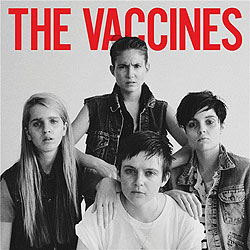 London indie rock band The Vaccines broke into the big time with their first album What Do You Expect From The Vaccines? It was the best selling band debut album of 2011. Now the four piece have issued their second album in double quick time and it has gone straight to the top of the charts.

So who are The Vaccines? The band consists of Justin Young, guitars and vocals, Freddie Cowan, guitar, Ami Amason, bass, and Pete Robertson on drums. Formed in 2010, the band has notched up an impressive run of live performances, often supporting bigger acts. The debut album was well received and the overall opinion was that The Vaccines were an outfit to watch for the future. Comparisons were drawn with The Strokes and The Ramones among others.

The second album, Come of Age, is a clear leap forward in musical form, the band now exploring new directions and moving into more mainstream rock territory. The format remains straightforward drums, bass and guitars only. However the style is definitely retro with echoes of 50s/60s lead guitar playing to add melody and counterpoint. Crashing chords have been toned down. With stronger songs, all written by The Vaccines, the result is a more varied and interesting album than the first one.

For this new album the chosen producer is Ethan Johns. He has done his usual superb job with the production, aided by engineer Dominic Monks. They have delivered a hi-fi treat for those who appreciate quality audio. Their previous production together was Tom Jones's Spirit In The Room - see our review of 24th May this year.

The drums and bass work well together as a rhythm unit and really propel the music through the album. They spread across the stereo centre stage with the guitars either side. Justin Young's vocals are to the front and the lyrics clearly heard.

It makes a change to say that here is an album with not a below par track on it. Typical of the quality is the opening track No Hope which is powered by the drums and bass behind a Dylanesque vocal. Upping the pace is the second track I Always Knew which features an echo drenched vocal chorus and guitars.

Other standout songs are the melodic All In Vain, the instrumentally interesting Aftershave Ocean, the Shadows Apache influenced Weirdo, and the closer Lonely World which is a beautiful song riding over a simple deep bass line with big guitar and vocal choruses.

If there remains an area to polish up it is with the lyrics which never rise above the ordinary. The only lyrics worthy of mention are those in the song I Wish I Was A Girl. Not sure if Justin means it or not, but: "You're a revelation to me, Life is easy when you're easy on the eye, And I wish I was a girl." Hmmm.....

This is a very good album and shows a young band developing rapidly and eager to explore their musical heritage. At this rate of progress their fourth or fifth album should be a classic.