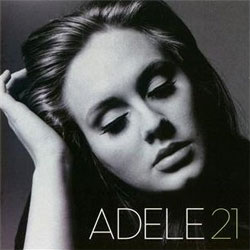 At the time of writing this review Adele's second album 21 has been at the top of the UK charts for a total of 14 weeks. Her first album 19 is at number 2. The albums have been huge sellers in America and many other countries. In just over 3 years Adele has achieved remarkable success, with 21 signalling that a major new talent has arrived.

To look at 19 for a moment, this was recorded when Adele was 19 years old. She wrote all but one of the songs herself. It's a fairly basic album and on the whole the songs aren't great but she did get two big hits with the tracks Chasing Pavements and Hometown Glory. The stand-out track, and a third hit, is Make You Feel My Love which significantly was not written by Adele but rather by Bob Dylan.

The album clearly indicated that here was a new singer with real talent and a very distinctive voice tinged with blues, soul and jazz. Two years later Adele recorded her album 21 both in London and America. She worked with seven different producers including such hot favourites as Rick Rubin and Ryan Tedder. She co-wrote 10 of the 11 songs. The sound is now much more confident and professional and Adele's voice has clearly matured since 19.

So far there have been two big hits off the album, Rolling In The Deep and Someone Like You. These, together with another track, Rumour Has It, are easily the best cuts on the album. They are showcases for Adele's voice and she does a great job on them – sheer class. The rest of the songs are OK but nothing special. However it must be said that the quality of the songs is stronger than on 19 so perhaps co-writing was a better idea.

My concern with the album is the production. Firstly there is a bright digital gloss which on a decent sound system can make Adele's voice sound hard and the real instruments sound electronic. The overall effect is strident and takes away the musicality. Unfortunately Adele is not the only artist to suffer at the hands of such production, but why?

Secondly, on many tracks, the producers have swamped Adele's voice with a fussy backing which is too loud. Tracks such as Turning Tables and Don't You Remember would have been far more effective with just simple piano or acoustic guitar backing, but instead we get the kitchen sink, loudly! Rick Rubin, for example, did a wonderful job when producing Neil Diamond's sparse sounding album 12 Songs but here he can't avoid the overproduction that does nothing to enhance Adele's performance.

It is a fact that Adele is much better singing live than when captured on her albums. Apparently her appearance on the Brit Awards singing Someone Like You caused a big surge in sales of her single and albums. I bet some people were disappointed to hear the recorded version in comparison because it lacks the emotion and immediacy of her live performance. Here is an artist who needs careful recording and sympathetic backing. I would like to see her record next with just one producer, a small band in a small studio and an old school engineer. The White Stripes did it when they recorded Elephant at engineer Liam Watson's Toe Rag Studios in London using antiquated tape machines. No digital harshness there.

So where does that leave us? A new singer who has the potential to be a future great if only she makes the correct career decisions. I hope she avoids the pitfalls of celebrity and goes for the long-term. Her voice and singing style will mature further. In my view hers is a voice that belongs in a smoky jazz and blues club rather than the vast tour arenas around the world. Regrettably I suspect it is the latter which will attract her.

A recommended album with some reservations. Now what will 23 bring us?