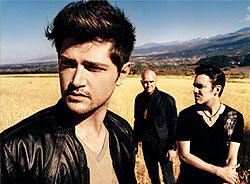 Irish rock act - The Script - have announced details of their first UK arena tour, which is planned for March 2011. The announcement closely follows the release of the band's latest album, Science & Faith, which went straight to number one in the UK album chart.

The Script will start their tour of mainland UK on 14th March with a show at the Liverpool Echo Arena. The tour then continues around the UK taking in most of the big arenas, including the MEN Arena (18th) and O2 Arena (26th), before finishing at the Cardiff International Arena on 29th March.

Tickets to the band's Irish shows sold out in just 40 minutes when they were released last week, so tickets to the UK tour are likely to be hot property when they go on sale at 9:30am this Friday.

Update 6th October 2010: After instantly selling out their first headline show at the O2 Arena in London, The Script have announced a second date for the capital. The second London show will be performed at Wembley Arena on 25th March with tickets going on sale at 9:30am on Friday 8th October.