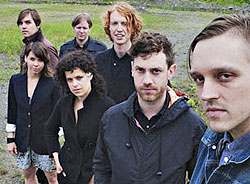 Arcade Fire, the critically acclaimed Canadian indie-rock band, have announced details of five UK arena shows to be performed in December. The tour announcement follows news that the band's latest album - The Suburbs - went straight to number one in the UK album chart yesterday. It is the first time that Arcade Fire have topped the UK charts.

The December tour will see Arcade Fire open at the O2 Arena in London on the 1st December, before visiting Birmingham, Cardiff, Manchester and Glasgow.

Arcade Fire are also set to be one of the headline acts at the Reading and Leeds festivals later this month.