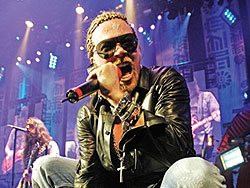 Guns N' Roses have announced a new leg of their long-running Chinese Democracy World Tour, which will include three dates at UK arenas this October. The new leg of the tour will see Guns N' Roses appear in London, Birmingham and Manchester. It will be the first time that the band have played a UK arena show in more than four years.

The Chinese Democracy World Tour originally started life back in 2001 and was used to preview songs from the (then) unreleased album of the same name. In 2008 Guns N' Roses finally released Chinese Democracy. The album received largely favourable reviews, which must have come as a relief to the band after they spent more than 14 years recording it!

During the last 9 years, the Chinese Democracy World Tour has been seen by over 3.5 million concert goers, making it one of the biggest rock tours in history.

Update 25th August 2010: Guns N' Roses have announced that they will perform an extra date at the O2 Arena in London, after the first date completely sold out! The extra date is scheduled for the 14th October.