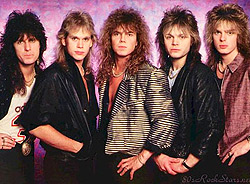 Swedish hard rock legends, Europe, have announced a new UK tour which will take place in February 2011. The band that stormed the charts in the eighties with the rock anthem, The Final Countdown, taken from the album of the same name, achieved huge success on the back of it and shot them to worldwide fame.

Their new tour, entitled Balls 'n' Banners will take in nine academies throughout Britain in February including Manchester, Birmingham, Newcastle and Bournemouth. This tour follows their successful appearance at the iTunes Festival in London.

Joey Tempest says "We're gonna bring something very special when we return to the UK in February 2011. We're having the time of our lives right now and the audience will experience a Europe camp that's on fire!"