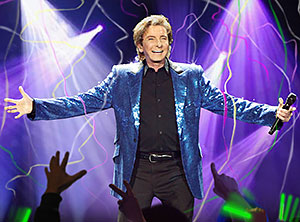 Barry Manilow has announced seven UK arena shows as part of his 'One Last Time!' tour. The American singer-songwriter will perform his final UK arena shows in Leeds, Newcastle, Glasgow, Manchester, Birmingham, Cardiff and London in June next year.

A statement posted on the star's website reads: "Barry wants to say goodbye and thank you to his friends in the UK on his 'one last time' tour in June 2016".

Barry Manilow will perform the following shows during his One Last Time! UK tour:

The tour announcement coincides with the 40th anniversary of Barry Manilow's 1975 hit song Mandy. To celebrate the fact, tickets for the upcoming UK tour will be priced from £19.75 plus booking fees.

Tickets for Barry Manilow's One Last Time! UK tour will go on general sale at 9am on Monday 5th October. Tickets will be available from Ticketmaster.co.uk and other ticket agencies.