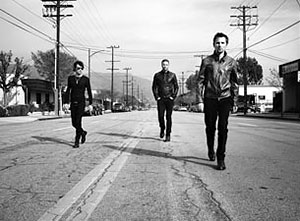 Muse have announced a string of UK & Ireland arena shows as part of a new world tour. The alternative rock trio will perform shows in Dublin, Belfast, Manchester, London and Glasgow next April during the 'Drones World Tour'.

Muse released their seventh studio album, Drones, in June to critical acclaim. The album reached No.1 in a staggering 23 countries including the UK and US.

The newly announced Drones World Tour will see the band perform 'in the round' from the middle of the arena – giving fans a true 360 degree experience.

Muse will perform the following UK & Ireland shows during the tour:

Tickets for Muse's UK & Ireland tour dates will go on general sale at 9am on Friday 18th September. Tickets will be available from Ticketmaster.co.uk and other ticket agencies. A pre-sale will also take place for Muse.mu members from 9am on Wednesday 16th September.