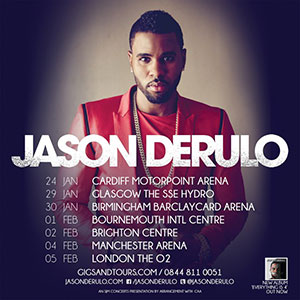 Jason Derulo has announced a new tour of the UK & Ireland to take place in January and February 2016. The chart-topping American pop star will perform 9 shows across the region during his biggest arena tour to date.

The tour announcement comes hot on the heels of Jason Derulo landing his fourth UK No.1 single with Want to Want Me – the lead single from his new album Everything Is 4.

Jason Derulo will perform the following shows during his 2016 UK & Ireland tour:

Tickets for Jason Derulo's 2016 UK & Ireland tour dates will go on general sale at 9am on Friday 5th June. Tickets will be available from Ticketmaster.co.uk and other ticket agencies.