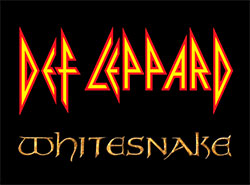 Rock legends Def Leppard and Whitesnake have announced a co-headline tour of the UK & Ireland for December 2015. The bands will perform ten arena shows together during the joint tour.

Speaking about the tour, Def Leppard frontman Joe Elliott said: "I am very excited to be working with Whitesnake again; we had such a wonderful time when we did it back in 2008. It's a great experience for rock fans to be able to see two great live bands on the same stage on the same night.".

Def Leppard and Whitesnake will perform the following shows during the tour:

Black Star Riders will provide support on all dates throughout the tour.