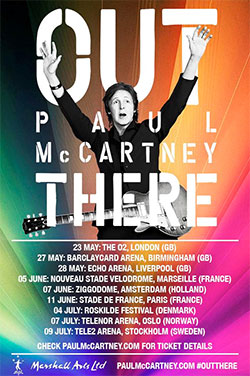 Paul McCartney has announced that he will perform three UK shows in May as part of his 'Out There' world tour. The shows will take place in London, Birmingham and Liverpool and will be his first UK concerts in three years.

The 'Out There' world tour has already been seen by almost two million people across 12 different countries since its launch 18 months ago. The newly announced UK shows will form part of the European leg of the tour.

Speaking about his upcoming UK shows, Paul McCartney said: "It's always great when you get to play in your home country. It's been a little while since I've performed here so we're planning a few surprises and looking forward to playing some songs we've never played here. We've taken this tour all over the world but there's nothing quite like rocking out with your home audience. We'll see you soon.".

Paul McCartney will perform the following UK shows during the tour: