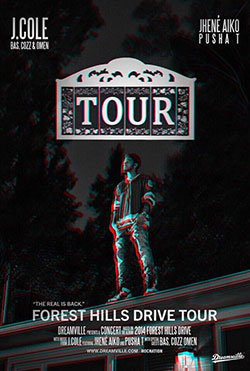 J Cole has announced a handful of UK shows for May 2015 as part of his 'Forest Hills Drive' European tour. The Grammy nominated American rapper will perform shows in Glasgow, Manchester, Birmingham, Cardiff and London.

J Cole will be touring in support of his third studio album, 2014 Forest Hills Drive, which reached No.1 in the US Billboard chart last year.

The chart-topping rapper will perform the following UK shows during the tour:

Tickets for J Cole's UK tour dates will go on general sale at 9am on Friday 27th February. Tickets will be available from Ticketmaster.co.uk and other online ticket agencies.