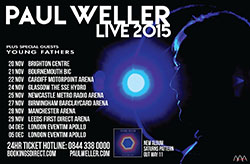 Paul Weller will perform the following shows during his winter UK tour:

Supporting Paul Weller throughout the tour will be alternative hip-hop group Young Fathers.

Tickets for Paul Weller's winter UK tour will go on general sale at 9am on Saturday 14th February. Tickets will be available from Ticketmaster.co.uk and other online ticket agencies.