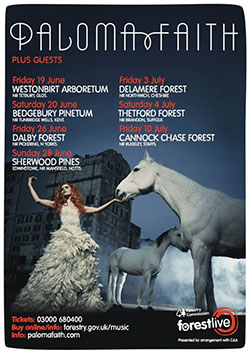 Paloma Faith has today confirmed a number of outdoor summer concerts as part of the Forestry Commission's Forest Live series. The singer-songwriter will perform live at seven forest locations in June and July.

Announcing her Forest Live tour, Paloma Faith commented: "We are very lucky in Britain to have such a beautiful and diverse landscape and I am excited to play for you there again. See you all in the summer!"

It will be the second time that Paloma has taken part in a Forest Live series, following her sell-out shows in 2013.

Paloma Faith will perform at the following forest locations in Summer 2015:

Tickets for Paloma Faith's Forest Live tour will go on general sale at 9am on Friday 23rd January, and will be priced from £38.50 (plus booking fee). Tickets will be available from Ticketmaster.co.uk and the Forestry Commission's own website.