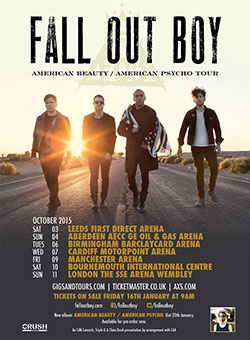 The tour will be in support of the band's sixth studio album, American Beauty/American Psycho, which is due for release next week.

Fall Out Boy will perform the following shows during the UK tour:

Tickets for the American Beauty/American Psycho UK Tour will go on general sale at 9am on Friday 16th January. Tickets will be available from Ticketmaster.co.uk, Gigsandtours.com and AXS.com.