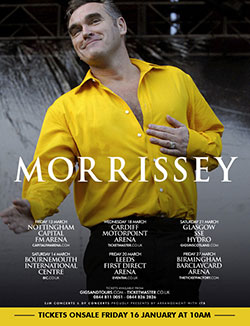 Morrissey has announced a six-date UK tour to take place in March. The influential singer-songwriter will perform gigs in Nottingham, Bournemouth, Cardiff, Leeds, Glasgow and Birmingham during the tour.

The new tour announcement comes after Morrissey recently finished a world tour in support of his tenth studio album, World Peace Is None of Your Business, which saw the singer perform just one UK date – at London's O2 Arena in November 2014.

The schedule for Morrissey's 2015 UK tour is as follows:

Tickets for Morrissey's UK tour will go on general sale at 10am on Friday 16th January. Tickets will be available from Ticketmaster.co.uk and Gigsandtours.com