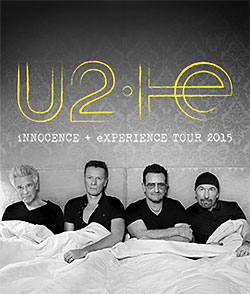 U2 have announced plans for a worldwide arena tour in 2015 with six UK dates included. The Irish rock gods will play indoor arenas for the first time in a decade during their 'Innocence & Experience Tour 2015'.

The UK leg of the tour consists of two pairs of shows at London's O2 Arena in October, plus another pair of shows at Glasgow's SSE Hydro Arena in November.

Speaking about the tour, with pairs of shows in each city, U2's frontman Bono said: "We are going to try to have a completely different feeling from night one to night two, and have some fun playing with the idea of innocence and experience. More to be revealed!".

U2 will perform the following UK dates during the Innocence & Experience Tour 2015:

Tickets for U2's 'Innocence & Experience Tour 2015' will go on general sale at 9am on Monday 8th December and will be priced from £30 (plus booking fees). Ticket pre-sales will also be available to U2.com subscribers from Thursday 4th December.