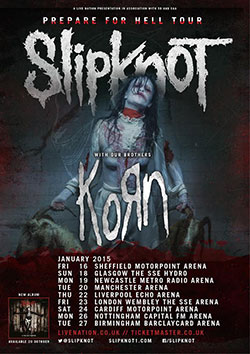 Slipknot have announced a run of UK & Ireland shows for early 2015. The masked metallers will descend upon arenas across the UK & Ireland with their 'Prepare For Hell' tour in January 2015.

The tour follows the release of the group's fifth studio album, .5: The Gray Chapter, which is due for release next week. The album marks the end of a six-year hiatus for the heavy metal group.

Slipknot will be supported by long-time friends and fellow metallers Korn throughout the tour.

Speaking about the upcoming tour, Slipknot's frontman Corey Taylor said: "The UK has always been very special for us. In a lot of ways, it's where this insanity began. So, for this tour, we decided to try and hit as many places as we could - not only England, but Scotland and Wales as well. Technically Ireland is Europe, but we're going there too. We're coming back for the people who started this for us: that would be YOU. Prepare yourselves... Hell is coming."

Slipknot and Korn will perform the following shows in January 2015.

Tickets for Slipknot's Prepare For Hell UK & Ireland tour will go on general sale at 9am on Friday 17th October.