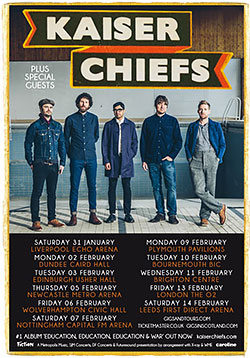 Kaiser Chiefs will embark on a full UK tour in early 2015. The indie rockers had previously announced shows for London and Leeds, but the tour has now been extended to cover an additional 9 venues across the UK.

Renowned for their high-energy live performances, Kaiser Chiefs are sure to put on a great show for their fans. The tour will begin in Liverpool at the end of January and will conclude with a huge homecoming show in Leeds on Valentine's Day.

The full schedule for Kaiser Chiefs 2015 UK tour is as follows:

Tickets for newly added UK tour dates will go on general sale at 9am on Friday 15th August. Tickets for the London and Leeds dates are already on sale.